Home / Apostille Convention will come into effect in August

/ Apostille Convention will come into effect in August

The Apostille Convention, which has been executed by 112 countries, will come into effect in Chile as of August 30th; its implementation process is underway with the launch of a new website.

Apostille is a certification that simplifies the existing legalization process of foreign public documents, modifying the steps needed to demonstrate their authenticity through a single procedure.

The documents issued in Chile and certified with an Apostille may be recognized in any other Apostille Convention member country, without the need for any further certification.

Likewise, documents from any Convention member country with an Apostille may be accepted in Chile without additional certifications.

The upcoming implementation has been most welcome since the current legalization process consists of a series of lengthy and expensive proceedings (including consular legalizations) conducted before different public agencies both before the originating and receiving State. 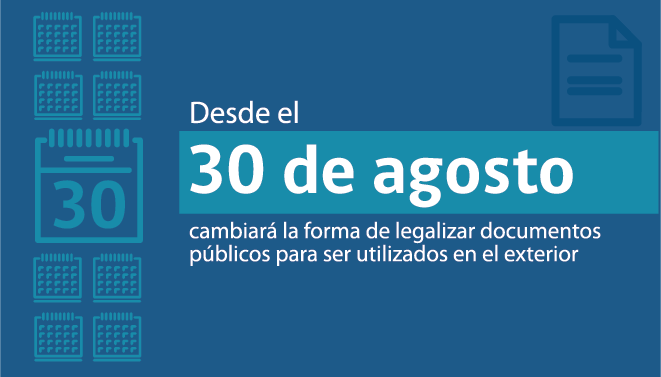 On December 16th, 2015 Chile deposited the Membership Instrument to the Hague Convention that eliminates the legalization requirements for foreign documents, introducing a new certification based on a single procedure to demonstrate their authenticity (“Apostille Convention”).

The latter seeks to simplify the authentication of public documents to be presented abroad, by facilitating their circulation among member countries, with the issue of an apostille, a certificate that must be granted as provided by the Convention, at the request of the party who subscribes the document or its bearer, certifying (i) that the signature is genuine; (ii) the legal capacity of the party who subscribed the document; (iii) and the identity of the seal or stamp on the document, as applicable.

The apostille shall apply to public documents authorized within the territory of a member country, which must be presented in another member country. For these purposes, although the public nature of a document must be defined by the internal regulations in the originating country, the Convention indicates which documents will be public, specifically excluding documents issued by diplomatic or consular agents, as well as the administrative documents making direct reference to a commercial or customs operation.

The Convention shall also apply to private documents that have been officially certified, although in this case the apostille will only certify the authenticity of their certification and will not grant such document a public nature.

The apostille will take the form of a certificate, that may be printed on a letter‑size white paper sheet, which must at least contain the following information: (i) country of origin, apostille number and date; (ii) name and legal capacity of the party who subscribes the document; and (iii) stamp and signature of the authority who issues the apostille.

The above procedure does not eliminate the existing document legalization system, which will still have a residual use in case that the foreign country (i) is not a Convention member country; or (ii) has raised objections to the Convention membership instrument presented by Chile.

Learn more about the Convention.