Home / The international trademark arrives in Chile: opportunities for exporters

/ The international trademark arrives in Chile: opportunities for exporters

Inta, Alessandri, Asoex and Wines of Chile Chile organized a virtual table to discuss the benefits and opportunities that open up for exporters with the Madrid Protocol, which Inapi plans to start in March 2022.

Chile recently approved the adherence to the Madrid protocol, a treaty that seeks to facilitate the application for the registration of trademarks of Chilean companies in more than 120 countries in a centralized way and paying a single set of fees.

The initiative, promoted by the Chilean Trademark Office (Inapi), in conjunction with the Ministry of the Economy, aims to benefit Chilean SMEs and companies that want to internationalize their brands (see video exporters). Inta supports this protocol as an option for brand owners to strategically protect and manage their brand portfolios.

The virtual event had a welcome and introduction by Rodrigo Yáñez, Subrei’s undersecretary. The invited speakers were Loreto Bresky, director of Inapi; Paulina Valderrama, ProChile legal director. Gabriela Alegría, the recently appointed deputy director of the Department of Registered Trademarks of Inapi, answered questions at the end of the meeting. She moderated our partner Rodrigo Velasco A.

The Undersecretary for International Economic Relations opened the meeting with a few words of welcome, and expressed his support for the Madrid protocol. They consider that this optional system will facilitate and reduce the costs of procedures associated with obtaining intellectual property tools. “It is of great help so that our Chilean entrepreneurs can go out to sell their products and services abroad and position Chile in different markets”, says Yañez, adding: “The Madrid Protocol has been specifically designed to facilitate the presentation and administration of various portfolios (…) By allowing the filing of trademark applications in multiple countries through a single system administered by Ompi”. 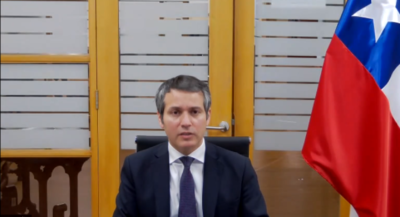 There are already 124 countries that form this alliance for “the international brand.” In Latin America: Mexico, Brazil, Colombia and now Chile are part of the treaty. Peru and Uruguay are evaluating it. Rodrigo Velasco opened the table by posing the challenges that Inapi has with the new panorama. “This mirror has two faces. Inapi will function as a designated office for foreign companies that want to come to do business. We are supporting Chilean exporters to go out into the world, but also attracting foreign investment and improving the conditions to do business in Chile”, he said.

In addition, our partner manifested that this system recognizes the Paris treaty (…) and gives the countries autonomy regarding the grounds for elimination and opposition trials. “The international registration functions as a mailbox for a global application, and once the territories are designated there is an independence regarding the bases for accepting or not accepting a trademark”, he explained.

Loreto Bresky commented that they are in an intense process in Inapi after adhering to the Madrid Protocol and the publication of Law 21,355 on July 5, 2021, which modifies Law 19,039 on industrial property and Law 20,254 that established the National Institute of Industrial Property.

For the Protocol to take effect, it has to pass a promulgative decree phase by the president, then go through the Comptroller’s Office and be published in the Official Gazette. After that, Ompi is notified of Chile’s adherence to the protocol. From three months later it would be working. “We project its start for March 2022, therefore, we have all that time to make modifications to our platforms, internal work and training for entrepreneurs so that they can properly use the system,” Loreto explained. 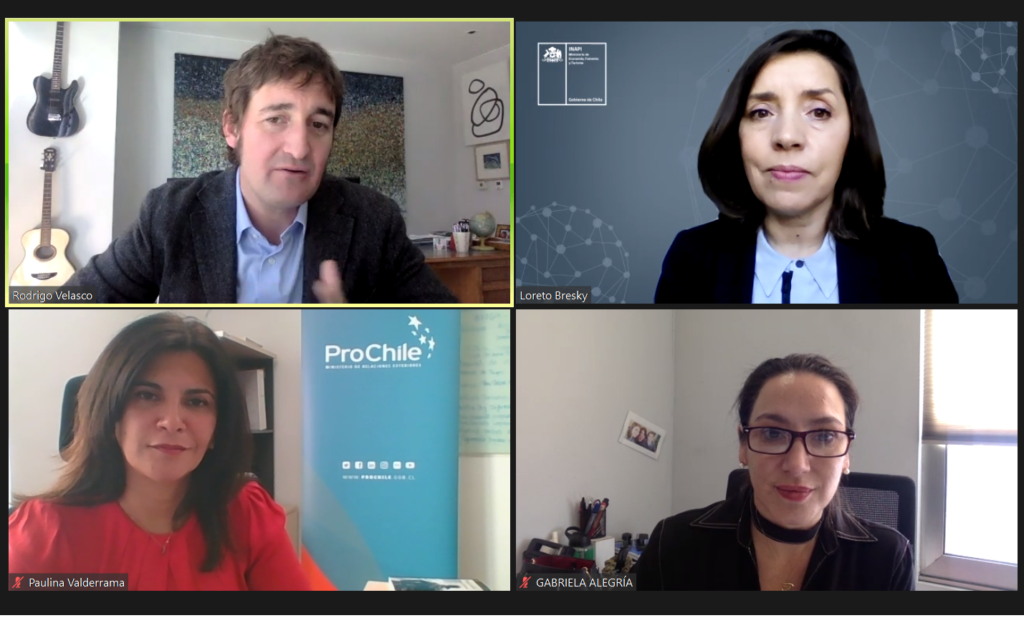 From ProChile, they believe that the protocol is good news for exporting SMEs and they join Inapi’s work to be able to train and promote the new method. “There is also the attraction of investments (…) Our 56 offices abroad will undoubtedly spread our incorporation to the protocol because it will be a tool to captivate investors in this highly competitive environment that we find ourselves in”, commented Paulina.

Paulina added that “we build an image when we position our brands abroad, attributes that we want to highlight as a country, and this tool helps in that area.”

After the presentations, the virtual table was opened to questions from the public and Gabriela Alegría, Inapi’s deputy director of trademarks, joined the panel. Gabriela stated that the protocol has a way of rushing the intellectual property offices in the procedures. “If an office reaches 18 months of silence without giving the result of the formal examination, it is understood that the registration of the trademark is accepted”, explained the deputy director.

The issue that was made clear is that this system is one more tool that the Chilean entrepreneur or company can decide to use or not, depending on what is best for them. The Madrid Protocol speeds up the process of filing an application for trademark registration at an international level. However, it is evaluated under the law and jurisdiction of each country. Therefore, if there is opposition or substantive observations in a particular country, a local lawyer should be hired to evaluate them. “It does not mean a guarantee that I will get my trademark registration in all designated countries, but it does mean a more centralized, less expensive filing process and the possibility of a single and simplified portfolio for renewal purposes, for example,” clarified Loreto Bresky.