/ Constitution Committee: Macarena Gatica was invited to speak on the Personal Data Bill

Macarena Gatica, partner of Alessandri, was one of those invited to speak on the bill that “Regulates the protection and processing of personal data and creates the Personal Data Protection Agency”.

On April 6, 2022, in accordance with the second constitutional procedure, the Constitution, Legislation, Justice and Regulation Committee (Constitution Committee) of the Chamber of Deputies discussed the processing of the personal data bill (Bill No. 11144-07). The invited speakers were Macarena Gatica, partner of Alessandri and Bruno Gencarelli, head of the International Data Protection and Data Flow Unit of the European Commission. 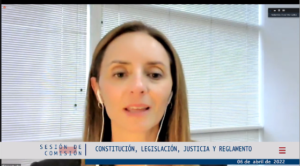 “Regulations that currently exist in Chile on personal data protection are totally obsolete (Law 19,628) despite the fact that it was a precursor in Latin America at the time. However, it is far from other legislations such as Argentina, Peru or Colombia. (…) In 2010, Chile, upon joining the Organization for Economic Cooperation and Development (OECD), assumed a series of commitments and the only commitment that has not been fulfilled is that of regulating the flow of data and the protection of personal data in terms of national regulation”, said Macarena in her speech.

Our partner also pointed out that the Political Constitution establishes a fundamental right for us regardless of our capacity; whether we are citizens, workers or consumers. Currently, the action of the only supervisory agency that exists is limited to a consumer relationship (Sernac’s power under article 15 bis of the consumer protection law). Therefore, if a person suffers a violation of his rights in a public service, there is only the option of going to the courts of justice. There is no agency more easily accessible to all citizens, such as a Personal Data Protection Agency.

The lawyer explained that when a country is adequate in data protection, it is called “safe harbor” and our country does not qualify. In Europe it is forbidden for there to be a trans-border data flow to an unsuitable country, which deprives Chile of access to the market equivalent to one fifth of the world’s GDP. If we were to subscribe to Convention 108 (Convention for the Protection of Individuals with regard to Automatic Processing of Personal Data), we would have the possibility of entering the European, Chinese and Japanese markets. All the countries that are part of Convention 108 have supervisory bodies with powers to investigate, supervise, sanction and raise awareness.

Finally, Macarena concluded her presentation by emphasizing that we are talking about a fundamental right, so it is really urgent to provide tools to be able to dispose and have an adequate protection of our personal data.

Technology, Cybersecurity and Data Protection
Manage cookie consent
To provide the best experiences, we use technologies such as cookies to store and/or access device information. Consenting to these technologies will allow us to process data such as browsing behavior or unique IDs on this site. Not consenting, or withdrawing consent, may adversely affect certain features and functions.
Manage options Manage services Manage vendors Read more about these purposes
See preferences
{title} {title} {title}